Ibn al-Khatib's story did end, unexpectedly and tragically as I mentioned in The Heretic, one of the stories within the anthology We All Fall Down. The cause can be found within that partly fictionalized account of his life during the plague.

In my previous post, I mentioned Ibn Khatima, who had documented the arrival of the Black Death in his home of Almería during the summer of 1438. He also wrote a treatise on the subject. Ibn al-Khatib also did the same, which he concluded in 1362. Within his observations, he indicated, “The existence of contagion is established by experience [and] by trustworthy reports on transmission by garments, vessels, ear-rings; by the spread of it by persons from one house, by infection of a healthy sea-port by an arrival from an infected land [and] by the immunity of isolated individuals.” This was the basis for his theory of contagion; the idea that persons could spread the disease to each other by their actions.

But the following line may have led to his brutal demise many years later, because he also wrote contradicting Muslim traditions as passed down by Prophet Muhammad regarding plague. “…A proof taken from the traditions has to undergo modification when in manifest contradiction with the evidence of the perception of the senses.” This line alone would have damned him in the view of the Islamic clerics and jurists who deemed the words of the Prophet as irrefutable.

Would Ibn al-Khatib have dared question any precept of his religion if he had not thought himself untouchable? He certainly had reason to believe no one could rival him.

Ibn al-Khatib ascends to the pinnacle of power, but the Black Death intrudes

After the death of his mentor, foster father and former tutor Ibn al-Jayyab, Ibn al-Khatib attained all the honors that man had held. Within Islamic Spain, the viziers who served the monarchs possessed power superseded only by the sovereigns. Ibn al-Khatib became the vizier or chief minister of the Nasrid Dynasty’s Sultan Yusuf I in January 1349 and would hold the position into the reign of Yusuf’s eldest son and successor, Muhammad V.

Among his responsibilities, Ibn al-Khatib oversaw the completion of the new religious school at the capital of Granada in April 1439. Some weeks earlier, he had received the great honor of composing an elegy to the family matriarch, Yusuf’s grandmother Fatima when she died in her nineties. During the autumn of the same year, the plague ravaged Morocco and claimed Ibn al-Khatib’s mother at Taza. However he might have felt about the loss, his responsibilities remained. He kept up correspondence with foreign potentates and dignitaries, writing to the Sultan of Morocco Abu Inan, requesting military assistance against the Nasrids foes in Castile on March 13, 1350. Fifteen months later he served as an ambassador to the Moroccan court, departing and returning in July 1351.

The assassination of Yusuf I occurred on October 19, 1354, cutting short the life of the ruler whom Ibn al-Khatib had served for 21 years. The enthronement of Yusuf’s firstborn as Muhammad V at the age of 16 allowed Ibn al-Khatib to exercise influence over the youngster’s policies and understanding of government. Alongside his fellow ministers, the courtiers, and nobles, Ibn al-Khatib publicly swore his oath of allegiance to his new master on November 9 and also secured the appointment of the Moroccan garrison commander. A month later, he visited Sultan Abu Inan at Fez, arriving to great pomp and an audience on December 14.

There he had an opportunity to meet with a man of similar age who would become a good companion and later, a rival. Ibn Khaldun’s family hailed from Yemen and like Ibn al-Khatib, he held a prestigious position among the Moroccan ministers, serving as Abu Inan’s private secretary. Ibn al-Khatib and Ibn Khaldun established and maintained a friendship after the former returned to Granada on January 30, 1355.

According to his enemies, Ibn al-Khatib made another misstep that put him on the path to charges of heresy. On May 1, 1356, he and his three sons arrived at a Sufi lodge outside Granada. Sufism is defined as Islamic mysticism, characterized in Ibn al-Khatib’s time by asceticism and rejection of the worldliness of Muslim regions. The orthodox, Maliki school of Sharia law held sway over Islamic Spain and saw Sufism as a direct threat. For his adherence to Sufi doctrine, the majority of Ibn al-Khatib’s writings went up in flames just before his death.

The monarchs of Granada’s Nasrid dynasty had known for several generations since the time of Muhammad V’s great-great-grandfather Muhammad II that at any moment, their fortunes could change. Ibn al-Khatib’s young master soon learned this lesson. During the month of holy fasting on August 21, 1359, over 100 conspirators scaled the walls. At night, they drove Muhammad V from Alhambra Palace, alongside his mother and toddler son, before installing Muhammad’s younger brother Ismail as the new sovereign.

The conspiracy between Muhammad's stepmother and his cousin / brother-in-law jeopardized Ibn al-Khatib, too. Dragged from his house, he endured his first bout of torture and imprisonment. A sister of his in their birthplace of Loja offered to pay a hefty ransom. But without the intercession of Moroccan Sultan Abu Inan’s son, Abu Salim, Ibn al-Khatib might have remained locked away forever. He rejoined his young master at Guadix and together with their families, they departed for Morocco. The exiles arrived at Fez on November 28.

Ibn al-Khatib travels preceded the return of the Black Death

Two and a half years followed, during which Ibn al-Khatib saw much of his new host country. While he served Sultan Muhammad diligently, writing letters on his behalf to the king of Castile who favored the legitimate ruler, Ibn al-Khatib earned a living at the behest of the Moroccan ruler. On March 11, 1360, he gave permission for the Nasrid minister to tour the kingdom. Ibn al-Khatib visited the Atlas Mountains that month and then went on to Marrakesh. The port of Salé seems to have suited him well, for he settled there in May and wrote a history of the Nasrid dynasty, poetry, and his plague treatise.

The Black Death returned later that year and might have cast its long shadow again. In The Heretic, I’ve speculated about the next victim it claimed, one whom Ibn al-Khatib held dear. His wife Iqbal died suddenly on September 7, 1361. I’ve found no indication of the cause for her demise, but given the prevalence of the disease from 1360 to 1364 in the region, plague seemed a possibility to me.

Although widowed with three sons, Ibn al-Khatib would have had little time for grief. Muhammad V gave him direct charge of his household, the mother, wife, and children he had left behind before returning to Spain in the quest for the throne. Ibn al-Khatib would have secured the Nasrid royal family from upheaval, as their Moroccan hosts fell at the command of a local minister, who placed three rulers upon the throne at Fez during the Nasrid exile.

On April 20, 1362, Muhammad wrote to Ibn al-Khatib with instructions to bring the royal family home to Granada. They departed on May 18 and arrived at Alhambra Palace on June 15. Ten days later, Ibn al-Khatib again ascended to the highest office in the land. With the power of his pen, he saw to the appointments of two men, Al-Bunnahi as the chief judge of Granada and Ibn al-Khatib’s young apprentice within the council of ministers, Ibn Zamrak, both in October 1362. Ibn al-Khatib would soon come to regret those choices.

Jubilant, he completed his treatise on the Black Death before celebrating the arrival of his friend from Morocco, Ibn Khaldun, along with the observation of the Prophet’s birthday at a great feast. But he also engaged in intrigue, seeing to the removal of the Moroccan garrison commander whom he had appointed in November 1354 from Almuñécar and the exile of the man and his entire family back to North Africa. The reason for a rivalry between the two men is unclear. Even Ibn Khaldun seemed a threat to Ibn al-Khatib and at his suggestion, Muhammad V sent Ibn Khaldun on a diplomatic mission to the kingdom of Castile, in February 1365.

The next four years indicated that Ibn al-Khatib spent much time devoted to his duties, but somehow, he had run afoul of the chief judge Al-Bunnahi and even Muhammad V. Was it because of the plague treatise, or the indulgence in Sufism, or something else history has not recorded? Regardless of the reasons, Ibn al-Khatib may not have had much time to reflect on them. Muhammad V had enjoyed friendly relations with King Pedro of Castile, but that all changed when the king’s bastard brother, the count of Trastamara called Enrique, murdered Pedro and took the crown. His line would eventually sire the first Queen Isabella of Spain. The Nasrid dynasty went to war with Castile once more, but soon, Ibn al-Khatib found himself embroiled in conflict with his master Muhammad.

Aggrieved by growing accusations of heresy and malfeasance against him, Ibn al-Khatib then lived in fear of his life. On December 10, 1370, with his youngest son Ali, he fled the kingdom of Granada forever. He sailed for the court of yet another Moroccan ruler, but not before writing Muhammad V a terse letter in which he laid bare all of his grievances against those whom he saw as conspirators against him. Had his former master threatened his life, too?

Ibn al-Khatib still had friends. The Moroccan sovereign welcomed him to court in February 1371 and even Ibn Khaldun forgave his old friend’s jealousy and pleaded with Muhammad V to send Ibn al-Khatib’s movable property and family across the sea, in a letter dated April 18, 1371. The rest of the family did arrive on the North African shore eight months later. But for Ibn al-Khatib, the worse remained.

In November 1371, the chief judge of Granada Al-Bunnahi condemned Ibn al-Khatib as a Sufi heretic and disbeliever. The judgment could not have come without the assent of Muhammad V. That month, Ibn al-Khatib’s manuscripts written on philosophy and Sufi mysticism became ashes among the pyres of Granada's central square. By the following summer, Muhammad V demanded his extradition from Morocco and received its ruler’s refusal, but at the start of fall that year, that same sovereign died. In November 1372, Ibn Khaldun spent some time with his beleaguered companion. Perhaps the last occasion in which the old friends would see each other alive.

The new Moroccan Sultan Abu al-Abbas Ahmad came to the throne in September 1373. He established good relations with Muhammad V of Granada and depended on him militarily. Their alliance sealed Ibn al-Khatib’s fate. In June 1374, he suffered arrest and imprisonment again. He sought help from other North African rulers, but to no avail. Two months later, men working on behalf of his enemies, Al-Bunnahi and Ibn Zamrak, whose career he had nurtured, entered Ibn al-Khatib’s cell where he awaited trial. They strangled him at the age of nearly 61. Dumped into an unmarked grave at first, his remains became disinterred and burnt to ashes, like so many of his manuscripts. Sometime afterward the ashes went into a grave at the Bab al-Mahruq cemetery in Fez.

So ended the life and story of Ibn al-Khatib, who once rose to the heights of power, only to have charges of heresy bring about his demise.

Read a fictionalized account of his years during the Black Death in We All Fall Down, available now. 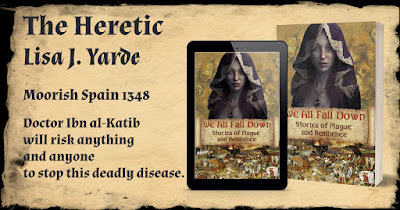 Email ThisBlogThis!Share to TwitterShare to FacebookShare to Pinterest
Labels: anthology, Ibn al-Khatib, Moorish Spain, new releases, The Heretic, We All Fall Down