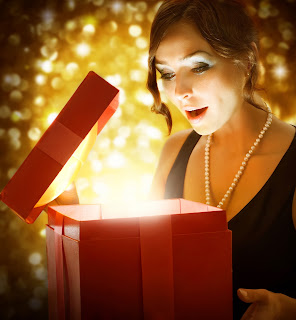 The fourth giveaway is here. One lucky person among the readers of Sultana's Legacy, the second in my Moorish Spain series set within Granada's Alhambra must be able to answer the following 3 questions to be considered in a drawing to win one $25 Amazon gift card -  the gift card can be used for anything you may purchase from Amazon. This giveaway is open internationally. 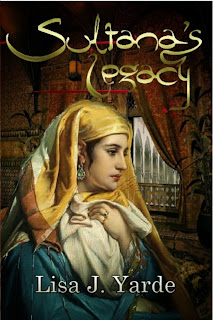 In Sultana's Legacy (2011), the heroine Fatima faces off against a powerful enemy and loses almost everyone she holds dear, as she tries to protect and preserve her family.

1. As the novel opens, what is the name of Fatima's sister who lives at Malaka with her?

2. How does Fatima's father meet his end?

3. Fatima has her favorites among her son Ismail's children in Gharnatah - what are the names of those favored grandchildren?

A. Leila and Yusuf
B. Muhammad and Asiya
C. Samir and Jamilah

Thank you for playing and good luck! Next and final chance to win a gift card will be on Friday, Jan. 3 , for readers of Sultana: Two Sisters. Happy New Year!
at December 27, 2013 2 comments: 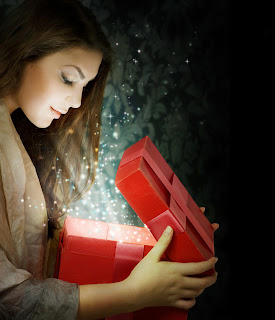 Time for the third giveaway, especially for readers of Sultana, the first in my Moorish Spain series set within Granada's Alhambra. As with the previous contests for On Falcon's Wings and The Burning Candle, I'm offering a $25 Amazon gift card by email to one reader who can correctly answer 3 random questions about the novel - the gift card can be used for anything you may purchase from Amazon. This giveaway is open internationally. 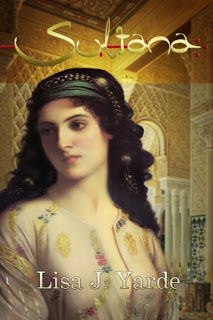 In Sultana (2011), the heroine Fatima is a Moorish princess wed to her paternal cousin Faraj, a move which precipitates a civil war between Fatima's family and their former allies.

1. What is the Moorish name of the city where Fatima grew up?

2. Which of the following men is Fatima's father?

3. What is the name of Fatima and Faraj's firstborn son?

Thanks for playing and good luck! Next chance to win will be on Friday, Dec. 27 , for readers of Sultana's Legacy. Merry Christmas!
at December 20, 2013 3 comments: 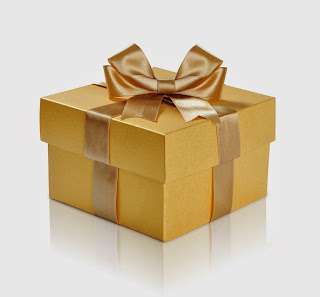 Ready for the second giveaway? For readers of The Burning Candle, I'm offering a $25 Amazon gift card by email to the first lucky reader who can answer 3 random questions about the novel - the gift card can be used for anything you may purchase from Amazon.This giveaway is open internationally.

Now, questions from The Burning Candle. 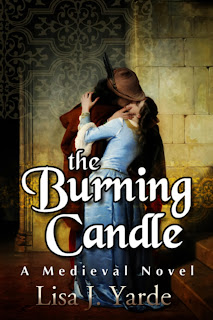 In The Burning Candle (2012), the 12th-century heroine Isabel de Vermandois marries a man older than her father and does her duty, until forbidden love gives her the courage to choose her own destiny.

1. What are the full names of Isabel's mother and father?

2. How many sons does Isabel have with her husband Robert de Beaumont?

A. Two, separated by three years
B. Three; twins followed by another boy
C. Four; only three live because the villain stabbed the fourth son

3. In the novel, Isabel has one friend in England, Amieria - what is the name of Amieria's famous father?

Thanks for playing and good luck! Next chance to win will be on Friday, Dec. 20 , for readers of Sultana. Happy holidays!
at December 13, 2013 4 comments: 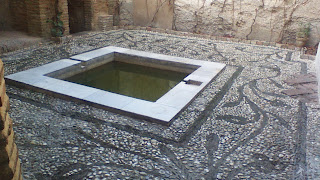 For devout Muslims of the medieval period and our times, the Qur’an informed about daily rituals of cleanliness, associated with prayer rituals. “O ye who believe! When you intend to offer the prayer, wash your faces and your hands up to the elbows, wipe your heads, and wash your feet to the ankles.” Personal hygiene became such an important aspect of Moorish life that there were at least twenty-one public baths within Granada during the medieval period. The best preserved of these can still be seen today, from the eleventh-century Zirid (Berber) dynasty. Called El Banuelo, visitors can find it along the Carrera del Darro, a narrow street flanking the Darro River. Just follow the route of the 31 bus from Granada Centro to Albaicin; entrance is free from 10am to 2pm, Tuesday through Saturday. 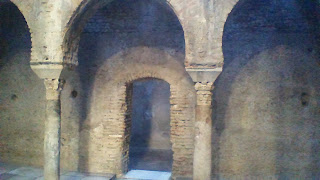 El Banuelo has the typical layout of a Moorish bathhouse. The low-hanging entrance (mind your head) leads to four chambers; a changing room where visitors left their clothes, the cool room for general washing and massages, the warm room for cleansing and scrubbing, followed by the hot room, where bathers could soak. Bath attendants would have provided towels. Women could have had their bodily hair removed and their nails, hands and feet painted with henna, while men enjoyed a shave. Bathing hours included specific times based on gender. Visitors made gradual progress through each space, so the bath ritual might last hours. 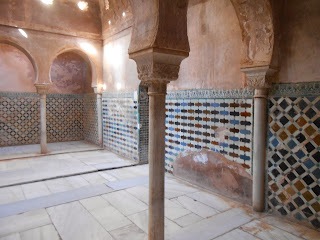 In Sultana and Sultana’s Legacy, Fatima would not have resorted to using this or any other public bath, not even the one attached to the mosque her brother Muhammad III had ordered constructed. Instead, Fatima would have accessed the bathhouse at Alhambra. Sandwiched between the Court of Myrtle and the northeastern edge of the Court of Lions built in the reign of Fatima’s great grandson, Muhammad V, this space has been opened to the public starting December 2013  just for a month – click here for more details. Maximum capacity is 15 people. If you are lucky enough to have a visit to Alhambra during this time, admission to the Palacios Nazaries gets you into the royal baths, called Banos Arabes. 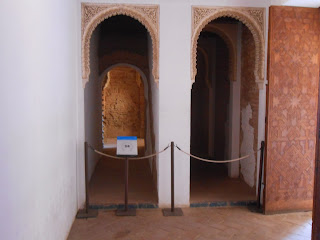 Fatima would have known it as the hammam begun in the time of her son, the fifth Nasrid sovereign Ismail I, a space also worked on by his son, Yusuf I. One of the poems of Yusuf’s minister Ibn al-Jayyab inscribed above the door welcomed Fatima and generations of her family:

“Enter in the name of God into the finest house, a place of purity, a room to be respected: this is the bath of the royal palace, on which great minds labored. Fire makes a pleasant heat here and pure water flows….”

An earlier version of the bathhouse must have existed before these rulers came to power at the beginning of the fourteenth century, but the current structure is all visitors can see. Entry came from two, second-story access points, from a vestibule just off the Court of Myrtles and a short hallway from the Court of Lions. The upper level also held the living quarter of the bath superintendent. The ceiling beams and panels show evidence of bright paint. There would have been a lantern fitted into the center of the ceiling. Anyone who leaned over the wooden balustrade would have seen a marble white fountain below on the first floor of the room. Four slender columns offered support. Stairs led down to the first floor. 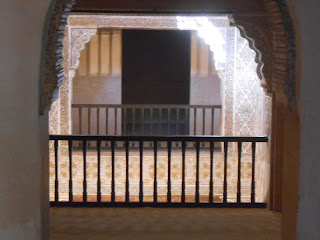 On the lower floor immediately beyond the pillars were two recessed alcoves situated across from each other. Two plaster-worked arches linked by a central column enclosed these alcoves. Assuming the hammam of Alhambra followed the general plan of most Moorish baths, this place might have allowed Fatima and her family to undress and get their towels, relax here or enjoy a massage. There was also a storeroom and a latrine behind the northernmost alcove. From the moment of their arrival, would-be bathers wore wooden shoes to protect their feet from the heat and spills in the bath. 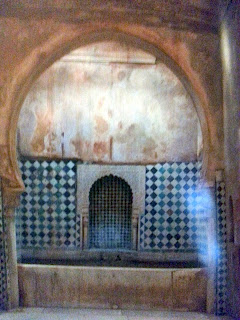 Next came the narrow cool room, known to Fatima as al-bayt al-barid, reached via a short hallway running to the east. A small cold-water basin remains here on the eastern wall framed by a painted horseshoe arch.

The central room was al-bayt al-wastani in Fatima’s time, a heated room with three vaulted spaces. Warmth rose from beneath the tiles. The recessed channel in the middle of the floor allowed for the run-off from bathers to drain away, while one marble step on either side supported the columns in the room. Bathers would have soaped and washed here, with pails or buckets of water thrown over them to rinse off.

Lastly, they would have arrived at the hot room, al-bayt al-sakhun. It had two marble tanks, one on the east and the other to the south, where bathers could immerse themselves. 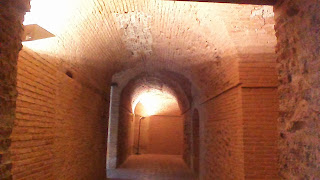 How did the Moors of Alhambra maintain this bath? On the lower level, accessed through the rooms the Catholic Monarchs added and an enclosed garden below, you will find redbrick walls along a warren of tunnels. They provided storage space for the wood required to heat the furnaces. These hallways also allowed those who worked behind the scenes to keep the baths heated and cleaned from disturbing the solitude of the bathers. 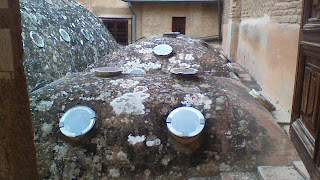 The ceiling of each of the bathing rooms features skylights or madwas, which provided ventilation. Each had a green or white glaze and red glass covered them, some shaped like eight pointed stars and others like tears. In the chambers lit by the skylights, Fatima and her family would have found luxury and comfort, but centuries of damage and neglect led to the closing of the royal bath. Only restoration work has allowed the space to open to the public again.
at December 12, 2013 No comments: 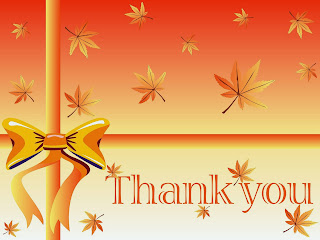 I've been looking for a way to thank some of the readers who've been kind enough to buy my work and share their opinions. This holiday season, every  Friday through January 3, I'll offer one $25 Amazon gift card by email to one lucky reader who can successfully answer all 3 random questions about my novels - the gift card can be used for anything you may purchase from Amazon. This giveaway is open internationally.

So I'll kick things off with 3 questions from On Falcon's Wings. 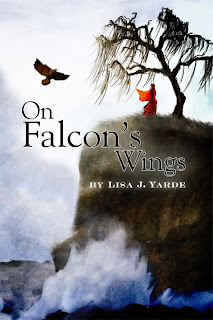 In my 2010 debut novel, On Falcon's Wings, the heroine Avicia and the hero Edric of Newington are medieval lovers torn apart by events leading up the Battle of Hastings in 1066.

1. In which region of northern Europe did Avicia and Edric first met?

A. England
B. Flanders
C. Normandy

2. What was the full name of Avicia's only friend after her arrival in Normandy?

3. What type of trial did Avicia have to undertake when the Normans discovered her affair with Edric?

Thanks for playing and good luck! Next chance to win will be on Friday, Dec. 13 , for readers of The Burning Candle. Enjoy the holidays!
at December 06, 2013 2 comments: