The Public Alhambra: Fatima's Perspective in Sultana - Part I 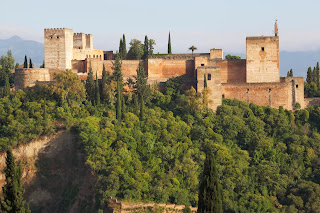 The Sultana series introduces readers to the real-life Moorish heroine Fatima, her husband Faraj and the rest of their family, all members of  the Nasrid clan, the last native Muslim dynasty in Spain. Sheltered from her youth within Granada's Alhambra (al-Qal’at al-Hamra), Fatima married Faraj, a paternal first cousin to her father Muhammad II in 1266 when she was between the ages of eight and twelve. Faraj was ten years older than his young wife. She died in her early nineties on February 26, 1349. Her husband preceded her in death some twenty years before, in February 1320. During Fatima's long years, she would have witnessed alterations to the complex of palaces, barracks, industrial and commercial quarters, mosques and baths at Alhambra. Although raised as a princess within the harem, Fatima did not remain hidden behind those walls. She would been familiar with all parts of the public domain her grandfather, father, brothers, son and grandsons ruled. From the dank, lowliest dungeon in Alcazaba to the delicate beauty of the summer palace at Alhambra, the Generalife, Fatima would have seen it all. 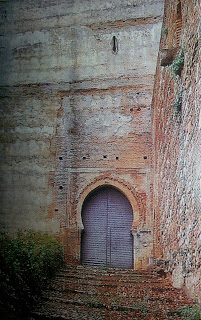 From the time her paternal grandfather Muhammad I occupied the site of Alhambra in 1237, thirteenth-century visitors and occupants of the site would have entered and left through its main medieval gate, along a course no visitors to Alhambra can see today. Referred to as the Puerta de Las Armas today, the precursor of this gate rose above what is now a neglected cobblestone path, permanently closed to all except Alhambra researchers. The route would have granted access to the complex for visitors from the north via a bridge over the Darro (Hadarro) river, and from the west up a hill, which the Moors called the Sabika. The gate connected with one of the oldest parts of Alhambra, its Alcazaba (al-Quasaba), which has existed since at least the ninth century during the first two centuries of Moorish rule over southern Spain. 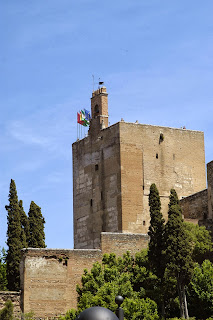 As the most fully excavated portion of the complex, Alcazaba was the citadel of Alhambra, where the barracks of the officers and sentries existed in the shadow of a watchtower Fatima's grandfather built, the Torre de la Vela. This squat tower affords one of the best views of Granada, if you're willing to undertake a climb up the spiral stair inside to reach the top. Alcazaba was a construction of the Zirid period in Granada, during which Muslim rulers and their Jewish viziers developed the foundations of the citadel Fatima would have been familiar with in her lifetime. During his forty-year reign, Muhammad I enlarged Alcazaba by adding the Torre de la Vela. He provided water access for his men via a canal into which the Darro flowed. Water allowed for the addition of a cistern and bath. More than soldiers lived at the barracks of Alcazaba. The foundations of the excavated buildings indicate they would have accommodated families. But this is was not just a location where Granadine warriors gathered with their wives and children, enjoying meals and music beneath the stars at the end of a long day. 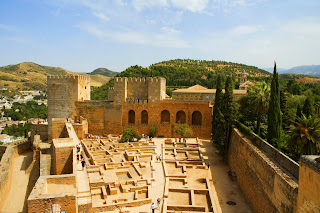 At the western end of Alcazaba, at the base of the Torre de la Vela, the sultans held their prisoners; captives for ransom and subjects who had fallen into disfavor. Unfortunates consigned to the cell descended via a ladder into a conical-shaped room with a trapdoor that left them no means of escape. Fatima would have been unable to escape their cries. In later years, when her full-blood brother Muhammad III poisoned their father and threw the man's servants into this dungeon, a warden took pity on them and offered the occupants some bread. When Muhammad III found out, he had the warden's head cut off and ordered it held over the trapdoor, dripping blood on to the prisoners, so that they could "have something to drink" in his words. During Muhammad III's reign, he also resided on the second storey of the Torre de la Vela at times. 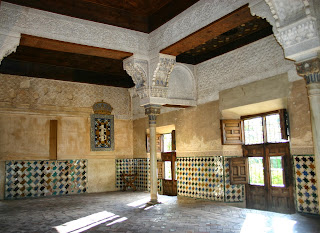 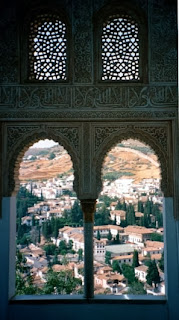 Moving from the west, in the thirteenth-century a makeshift marketplace bounded by a precinct wall and a small ravine separated Alcazaba from the administrative areas of Alhambra. The northern boundary wall allowed visitors and residents to pass from this space, but it's impossible to know the thirteenth-century version of what preceded the sixteenth-century Patio de Machuca, which now occupies the west of the so-called Mexuar, or council area. Part of the reason some think the Mexuar was the council chamber likely comes from one tile in the room, which reads "Do not be afraid to ask for justice, for you will find it." Today, this space is where most visitors to Alhambra are invited to enter the palace. It's believed the foundations of a ministerial body developed during the reign of Fatima's father Muhammad II, perhaps prompted by what he had seen of the Castilian rudimentary parliament, the Cortes, during a visit to Seville in  December 1273. His council, the Diwan al-Insha, included some of the most preeminent men of Granada who served as secretaries, and heads of departments. A thirteenth-century lantern of stained glass once caught the sunlight filtering into this room. North of the Mexuar is a room designated as an oratory, retaining a wall inscription, "Do not be negligent. Come to prayer." The oratory opens up to a northwestern view of the Darro and the Albaicin neighborhood  known from Moorish times as al-Bayazin.

Later, I'll have more the public spaces Fatima would have been familiar with from the reign of her father, including what is now called the Hall of Ambassadors and the Court of Myrtles, the Partal buildings from the time of brother Muhammad III, the towers of her half-sibling Nasr I and the summer palace her son Ismail I built on an incline overlooking Alhambra.

For more, check out this virtual walking tour of Alhambra from Saudi Aramaco World.
at October 10, 2013 No comments: