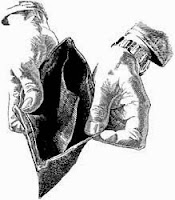 By all means, readers, vote with your wallet. I do the same. But please, don't hate the authors for issues beyond their control. And yes, I'd still say that even if I wasn't trying to join their ranks.
at February 11, 2010 2 comments:

Time to Go Back To School?

Shocked at the suggestion? Well, so am I, especially since I'd once sworn to never consider formal education again.  I survived three and a half years of law school, and that was enough to leave me convinced that the next time I'd ever return to any school would be for my kids, on parent-teacher night.

I've heard people in the publishing industry suddenly sit up and take notice of queries which casually mention, "By the way, I have an MFA." But, that's hardly any motivation for me to spend thousands of hard-earned dollars on yet another degree.  And, I'm not pursuing this because I'm bored and have nothing better to do.  My personal, professional and writing lives ensure that I'm always busy.  I'm also not dying to take the GRE just to see how well I'd do on it.  I've taken enough nerve-wracking tests to last me a lifetime.

So, why am I considering an MFA in creative writing? Because, it's what I should have always done. When I was eight years old, I decided to be a lawyer.  No second thoughts or hesitation. Practically every step in life that followed was in pursuit of that goal. Then, in my last year of law school, I realized how much I hated it.  An expensive lesson, but still a lesson learned.  Somehow, along the way, I'd forgotten my love for creative writing, which started in junior high school with short stories written for mine and my friends' amusement.  Even won a top prize in a collaborative writing contest.  Now, I can't imagine anything life I'd rather be doing than writing.  So what, if it took me thirteen years of wandering to figure this out? I may be late in reaching my destination, but at least, I'm on the right path.  One which will hopefully lead to grad school.  Wish me luck.
at February 04, 2010 3 comments: