At the same time as the Meet My Main Character theme had become popular on the blogs of other writers of historical fiction, I had planned to introduce the others in my cast of characters from Sultana: The Bride Price. Here's the hero of the novel, Sultan Muhammad V.

Readers of Sultana: Two Sisters while remember Muhammad as the only son of Sultan Yusuf and his former Christian slave, Butayna. At the abrupt end of his father's life, Muhammad came to the throne. The novel opens with him at fourteen months into his reign, where he is contemplating more than just the marriage offer made to his cousin Jazirah, which I talked about in a previous post. I imagine Muhammad's physical appearance as similar to this painting; he's dark-haired, a bit burly, always well-dressed, but saddled with a brooding personality.

As the eldest of the three sons of Yusuf, Muhammad faces turmoil within his harem. He's plagued by worry that his stepmother Maryam, the villainess of Two Sisters, is plotting against him along with the governors of his province. Since Yusuf did not officially name an heir before his death, leaving it to high ranking ministers to select Muhammad, his position is a little precarious. The continued rivalry between his mother Butayna and Maryam becomes dangerous, as each women develops factions for support within and outside the palace. Muhammad's been burdened by duty for so long that he can't even contemplate marriage to the woman he truly loves, a Berber concubine named Haziyya al-Riyad. Even more perplexing, Haziyya nor any other concubine in his harem has managed to conceive a son for him in years. Coupled with the fact that his future bride's father numbers among malcontents who wonder whether Muhammad's ministers made the right choice of an heir, he doesn't start off the novel in a very happy place.

Muhammad is, as with most of my characters, based on the historical figure of Sultan Abu Abdallah Muhammad V of the Nasrid Dynasty, based within Granada's Alhambra. Born January 4, 1338, he ascended the throne when he was sixteen immediately after his father's death. In writing about him, I didn't have to dig too deep to imagine what life would have been like for a teenager to lose a parent - my father died when I was the same age. Luckily, I didn't have even one quarter of the responsibilities Muhammad would have faced at the time. As the new ruler of a kingdom slowly shrinking while the Castilians and Aragonese nibbled away at Granadine territory in the north and the Muslims of Morocco tried to influence Granada's politics and future, Muhammad needed counselors at his side. He relied upon two men from his father's reign in particular, each of whom play strong secondary characters, the ministers Ridwan and Ibn al-Khatib. But there comes a time in every young person's life when you want to step out from the shadows cast by the adults in your life, and Muhammad's experience wasn't any different.

He was one of the most enlightened rulers of Moorish Spain. He is largely responsible for the beauty within Alhambra that we are fortunate to see today. He ordered the construction of one of the best hospitals in fourteenth century Spain, the Maristan. When the Castilians under Enrique II began a relentless persecution of Jews, Muhammad welcomed them into Granada. He met or knew many of the famed scholars of the time, including Ibn Battuta who visited during Yusuf's reign and Ibn Khaldun, who would later serve as an ambassador to Castile on Muhammad's behalf. He regained much of the territory lost by his ancestors to other rulers, including a major victory at the port city of Algeciras in 1369. During his reign, he sired at least four sons and one daughter, leaving his kingdom and his heir poised to continue with great achievements.

How does my portrayal square with the real Muhammad V? The factual accounts of his life certainly influenced the events I've written about in The Bride Price, but historical fiction isn't just names, dates and places. It's about people. In the novel, Muhammad is shrewd beyond his years, but also a very suspicious young man who sees traitors hiding in every darkened corner. The sudden loss of his father shapes his perspective, as does his relationship with his mother, who as a Christian and a former slave, is viewed with some merited suspicion by others in the kingdom. When she exhibits very secretive behavior while insisting on her son's marriage to a traitor's daughter, Muhammad can't help but wonder whether his mother has his best interests at heart. I don't doubt the real ruler must have faced similar quandaries, not knowing whom to trust. Find out how the fictionalized Muhammad resolves his difficulties in Sultana: The Bride Price.
at April 22, 2014 No comments:

Sultana: free for 3 days on Kindle 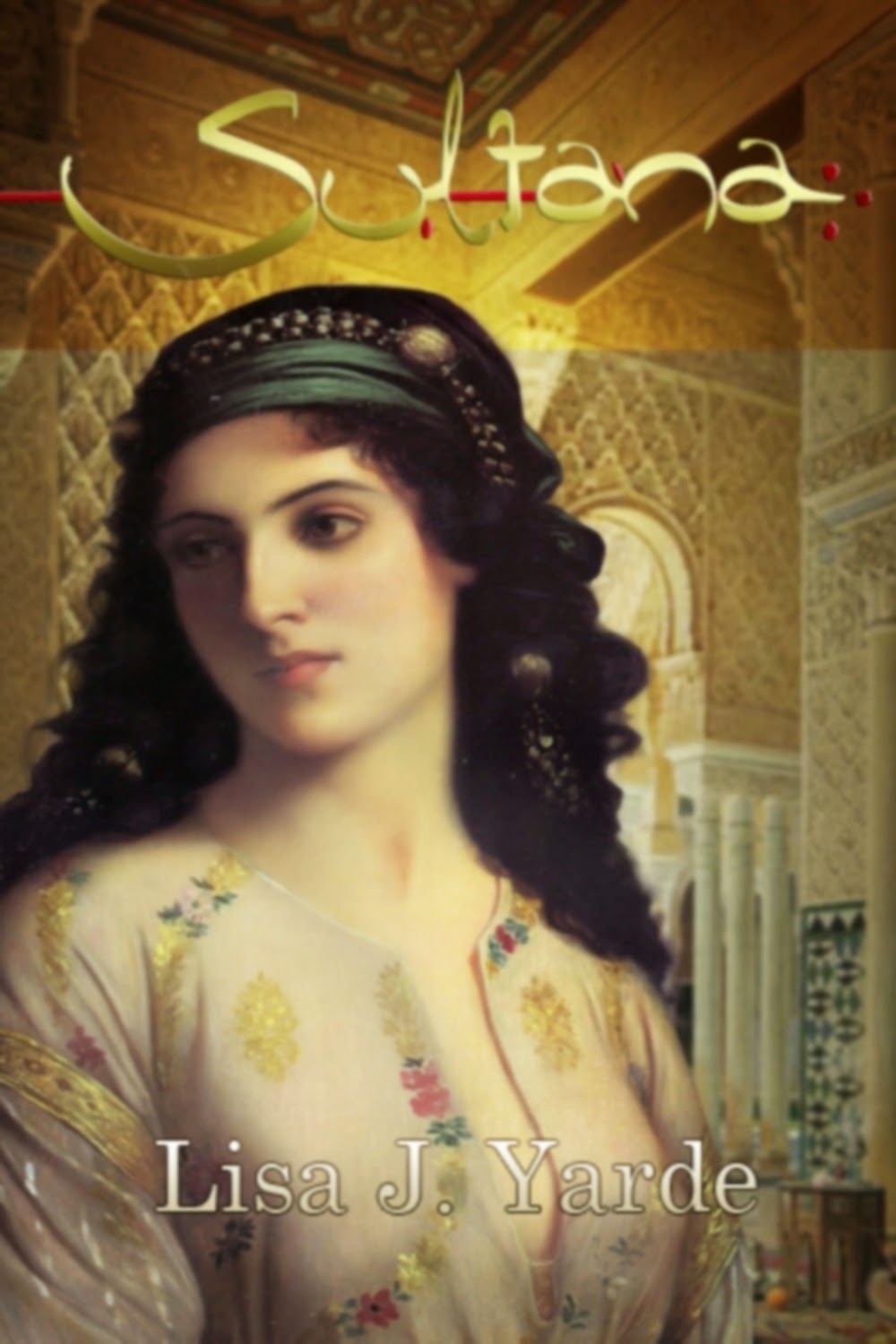 Sultana: A Novel of Moorish Spain (Sultana: Book 1) is free on Kindle April 17 - 19. Get caught up on the series before the fourth book, Sultana: The Bride Price, makes its debut in May. http://authl.it/16r.

In thirteenth-century Moorish Spain, the realm of Granada is in crisis. The union of Fatima, granddaughter of the Sultan of Granada, with the Sultan’s nephew Faraj has fractured the nation. A bitter civil war escalates and endangers both Fatima and Faraj’s lives.

All her life, Fatima has sheltered in lavish palaces where danger has never intruded, until now. A precocious child and the unwitting pawn of her family, she soon learns how her marriage may determine her future and the fate of Granada. Her husband Faraj has his own qualms about their union. At a young age, he witnessed the deaths of his parents and discovered how affluence and power offers little protection against indomitable enemies. Guilt and fears plague him. Determined to carve his own destiny, Faraj struggles to regain his lost inheritance and avenge his murdered family.

Throughout the rugged frontiers of southern Spain, the burgeoning Christian kingdoms in the north and the desert states of North Africa, Fatima and Faraj survive ruthless murderers and intrigues. They unite against common enemies bent on destroying the last Moorish dynasty. While Fatima and Faraj establish a powerful bond, the atmosphere of deceit creates opportunities for mistrust and tests their love.

Aisha smiled again, but it seemed sad. “Hush now, child, listen well. Understanding shall come. Even when you must do what others command, never forget the power of your own reasoning. One day, your husband may rule your body, he may even come to rule your heart, but your mind is and always must be your own, where none but you may rule. Promise me that you shall never forget these words.”

Fatima swayed slightly. Her throat hurt, but she whispered, “I promise.”

She returned Aisha’s intent stare, for the first time, unafraid. Aisha’s eyes glistened like gems in the lamplight.

“This is the only measure of advice I can give you, Fatima. You must learn the ways of men, as I have. Do not trust in men alone. Love, be dutiful and respectful, but trust yourself and your instincts first. They shall always guide you rightly.”
at April 17, 2014 No comments:

Earlier this spring, author Debra Brown started this series of posts from writers of historical fiction, "Meet My Main Character" and my good friend and fellow author Anita Davison tagged me. So, it's time to introduce readers to the title character of Sultana: The Bride Price. 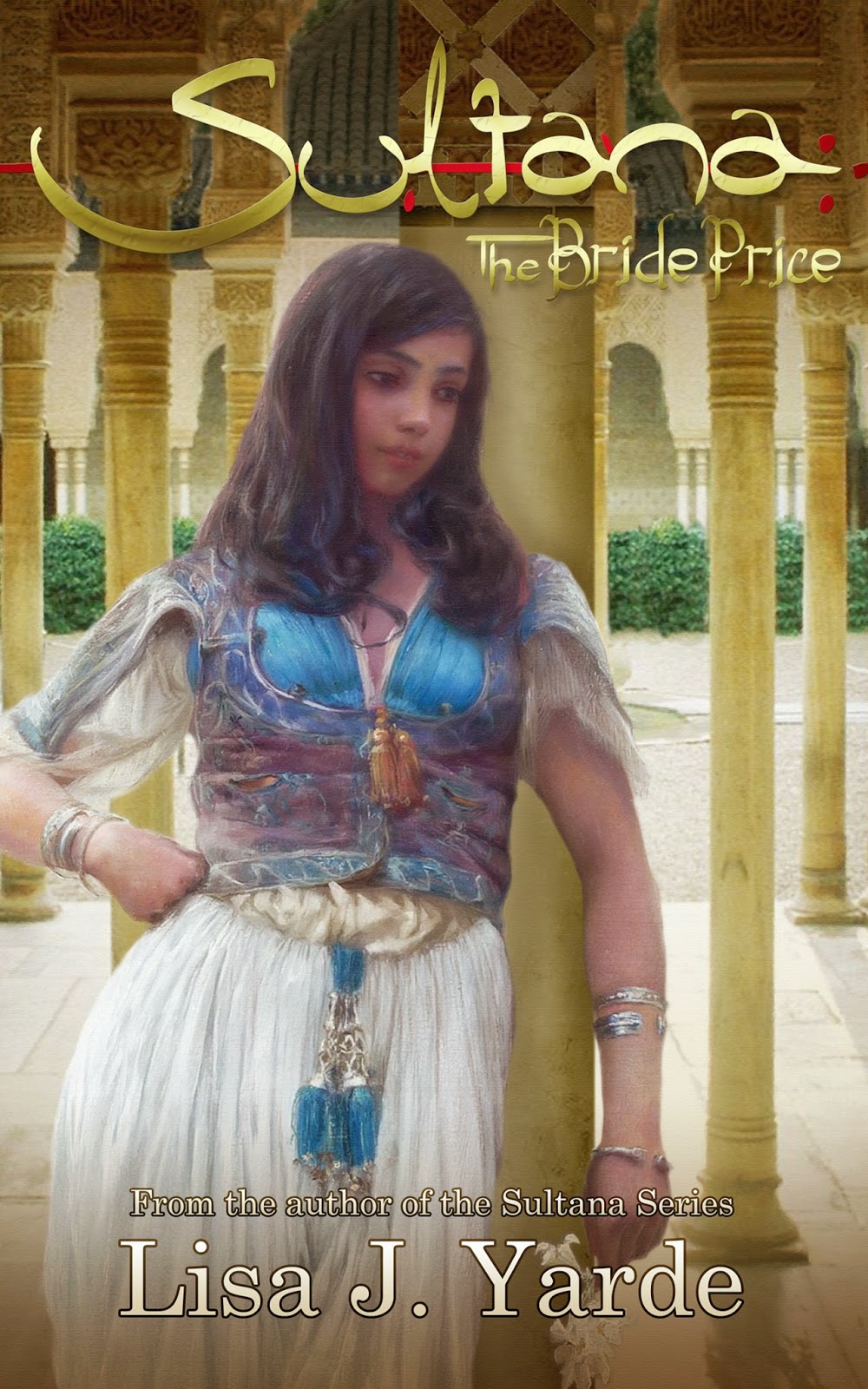 What is the name of your character? Is she fictional or a historic person?

Her full name is Sultana Jazirah bint Ismail of the Nasrid Dynasty. She is based on a historic personage, the wife and paternal cousin of Sultan Muhammad V. Although historians know several details of her life, one of the most important facts went missing over the centuries; her real name.

When and where is the story set?

The story is set in Moorish Spain within Granada's Alhambra palace mostly, during a ten-year period of 1357 to 1367, which was a turbulent time during Muhammad V's reign.

What should we know about Jazirah?

She lives a remarkable life in adverse times. When she was six, her father was imprisoned by his brother for treason, so Jazirah did not enjoy the pampered existence one might expect for a princess. When she is sixteen, she receives a marriage proposal from Muhammad V, an opportunity to seal the breach in the family caused by her father's imprisonment. She eventually accepts, but even after the marriage, peace does not follow. While Jazirah and Muhammad share a deep attraction and understanding of each other's natures, neither has reason to trust or rely upon the other.

What is the main conflict? What messes up her life?

How does a woman who has no reason to trust her new husband and no hope of a bright future with him learn to embrace new possibilities? Jazirah has lived with the consequences of betrayal all of her life, so she struggles with an inability to understand the intentions and motives of almost everyone around her. While she is perceptive, she's also judgmental and guided by the bitter past. Jazirah's difficulty in reconciling past and present dims her future prospects.

What is the personal goal of the character?

To find her own path toward forgiveness and faith in her marriage, to let go of old hurts and to secure the future for her and Muhammad's children.

When can we expect Sultana: The Bride Price to be published?

Late May. I'm making some changes based on feedback from members of the NYC chapter of the Historical Novel Society.